skip to main | skip to sidebar

Cineaste is a film magazine published quarterly. It has been publishing reviews, in-depth analyses and interviews since 1967. The magazine independently operates out of New York City with no financial ties to any film studios or academic institutions.
However publication of the magazine is made possible, in part with public funds from the New York State Council on the Arts, a State Agency and the National Endowment for the Arts.
Here is part of a review which was written for Crash by Michael Sicinski
Paul Haggis's debut feature Crash is one of the best-reviewed films to be released so far this year, and it isn't going away. Judging from those reviews, its makers have successfully generated an air of Importance around it, and this is dangerous, because this pensive ambiance may well mean that the film's slipshod, contrivance-laden ‘analysis' of race relations could be mistaken for genuine insight.
Naturally, Haggis's choice of subject matter goes a long way toward establishing both its own relevance and a hard-nosed creative fearlessness bordering on the pugilistic. Crash tackles race relations in the U.S., using present-day Los Angeles as its roiling laboratory. Haggis must surely be aware that any such film project will be accorded a degree of respect simply by dint of addressing this topic. Since Hollywood generally avoids the unpleasant truths of American racism, any film that dives into this particular wreck must be brave, bracing, and controversial. Selecting L.A. is a kind of no-brainer here, for a few basic reasons. Not only does it give the impression that the Hollywood machine is taking a hard look at itself, digging up the bones in its own backyard, but it also provides instant historical cachet.
In short, Crash is presold as a piece of liberal artistic intervention, and in this way the entertainment industry is paradoxically rewarded for its timidity. By avoiding controversy most of the time, a risk-averse Hollywood can sell its own periodic ‘daring' as a product unto itself, and Crash fits the bill beautifully. It has an air of truth, without ever saying anything truthful.
The plotline of Crash could be described as a riff on Arthur Schnitzler's La Ronde, with racial hatred replacing the sexual coupling. There are two major events around which most other occurrences in the film circulate—the murder of Peter (Larenz Tate), a young African-American criminal, and the titular car crash in which Christine (Thandie Newton) overturns in her SUV. Sgt. Ryan (Matt Dillon), the racist cop who sexually molested her during a traffic stop the previous night, is the officer on the scene who pulls her from the burning car. Throughout the film, characters encounter and reencounter one another in highly convenient ways. For example, Peter's brother Graham (Don Cheadle), an LAPD detective, discovers Peter's dead body in the desert. Prior to learning of his brother's death, Graham is strong-armed by the D.A.'s office into suppressing evidence that may partially exonerate a white police officer charged with killing a black cop. The D.A. (Brendan Fraser) is looking for a conviction that would help endear him to the black community, since he is trying to manage a potential media scandal. He and his wife (Sandra Bullock) were carjacked in Sherman Oaks by two young black men—none other than Peter and his friend Anthony. 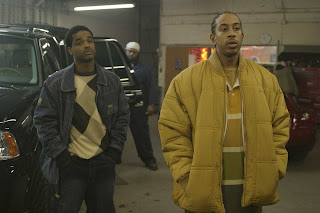 In a distinct but intersecting circle of coincidence, each of the two cops responsible for pulling over Christine and her husband Cameron (Terrence Howard) is later shown performing a good deed. Sgt. Ryan rescues Christine from her SUV, and Officer Hanson (Ryan Phillippe) intercedes on Cameron's behalf during a police standoff. Presumably this is intended to complicate the heinous behavior we witness elsewhere in the film. (Officer Hanson, in fact, is Peter's killer.) The film tells us that no one is all good or all bad. This is a facile, obvious notion, and ironically, one Crash propounds only by showing human behavior at its polar extremes.

In addition to the dominant cultural assumptions already mentioned (almost by definition, a movie addressing racism equals ‘gritty reality'), I think there are some basic ways in which a film like Crash coincides—both formally and politically—with certain desirable images liberal America has of itself.
One comes away from Crash with a very liberal, localized understanding of how racism works. You see, everybody's a little bit racist, and you never know when you'll find yourself in a situation when and where your racist nature will emerge. Or, as Sgt. Ryan says to Officer Hanson upon the dissolution of their partnership, “You think you know who you are. You have no idea.”
The dominant illusion that Crash's form attempts to convey about its own narrative is that each character does something virtuous in one situation, and something unconscionably racist in another. But this isn't true. Some characters are exemplars of pure good. Latino locksmith Daniel (Michael Pena) exists solely to incur racist threats and insults from other characters, then to belie their opinions through his role as the most upstanding of family men.
Crash's form also gives the impression that everyone gets equal time in a sort of round-robin of racism, but again, this isn't true. Haggis devotes negligible screen time to most of his female characters (Christine is something of an exception), subtly sending the message that the racism we need to worry about is a man's affair. Graham's partner / lover Ria (Jennifer Esposito) is afforded no fully-developed characterization, but is subject to one of the film's cruelest racial slur / laugh lines. HMO bureaucrat Shaniqua Johnson (Loretta Devine) is similarly placed—a cipher and a target for bigoted macho taunts. Likewise, not all races are given equal time in Crash. While Daniel is the main focus of the third, smaller circle of interactions, paired with an angry Iranian shopkeeper (Shaun Toub) who blames him for the vandalism of his store, Latinos and Persians are generally relegated to afterthought status in this narrative thread. Or worse, their less-than-integrated narrative function bespeaks a racial-quota, show-of-hands presence that falls prey to the worst bean-counting tendencies of identity politics. The simplistic rendering of these characters (Daniel as the vato with the heart of gold, Farhad the shop-owner as misplaced, impotent rage) only underscores this impression.
If the characters in Crash were real people, in the real world instead of Haggis's cordoned-off fantasy L.A., we'd see that they are not equal. Especially in the present atmosphere of backlash against so-called ‘political correctness'—an atmosphere Crash exploits to the fullest—
people often get huffy when a person of color points out the difference between racism and prejudice, like it's mere sophistry or special pleading. But it's true—only white people in America are able to systematically reproduce the world in accordance with their own racial biases.
http://www.cineaste.com/Sicinski.htm
Posted by neema at 11:01 AM 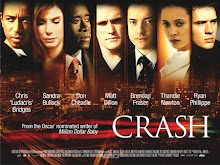